« I found the expedition to Manaslu the hardest compared to my last three climbs. Maybe K2 in 1996 from North was harder. I didn’t have such a bad weather even on Kangchenjunga in 2001, and now I understand why even excellent climbers were talking about Manaslu with such a deep respect. »

It snowed heavily for six days. More than five feet of snow. Six days have put an end to our hopes for the summit.

We have tried everything. But on a mountain like Manaslu, known for its high risk of avalanches that have caused a fatal accident out of two, ventured to the summit in these conditions are reckless. No sherpa would have accompanied us. Moreover, the return of good weather goes with a strong high altitude wind that forced us to hope for an unlikely window of relative calm.

The last two teams present on the Base Camp, one Mexican, one French, with whom we have studied the possibility to join forces – form a joint team of sherpas, identify and re-equip the fixed ropes in the most dangerous areas, try to reach the summit in a fast and light attempt – have permanently left the Base Camp or are about to do. 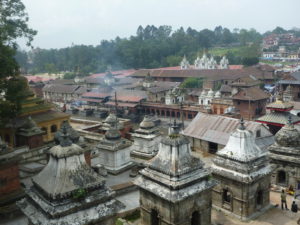 We needed two small days of clear weather to reach the summit on the night of October 3 to 4; the Himalayas gave us six days of storm, a huge end of monsoon as it rarely occurs at this season, which finally condemned all our hopes.

03.10.09 – Bad weather forecast – Back to base camp for Guillaume Hintzy and Michel Vincent

After a night at Camp 2 (6400 m), and a push to Camp 3 – located by the north col at 6900 meters high, all the team came down to Base Camp on the 27th of September. As far as I’m concerned, I took the opposite direction and went up to sleep at Camp 3 on the same day with Sherpas Phu Dorje and Then Dorje.

I came back to Base Camp yesterday. Bad weather and strong winds will shortly beat down on the mountain for about 10 days. We absolutely need to reach the summit before the 4th of October. Except for Laurence, which is not enough acclimatized to go on a summit bid, we will set off again towards the altitude camps, as soon as tomorrow, and hope to reach 8163 meters high, without oxygen, during the night between the 3rd and 4th of October.

Our Sherpas have organized a great and full of emotion Puja ceremony. On 22nd of September, we – Michel and I – reached Camp 2 after a difficult traverse below gigantic séracs and the ascent of steep snow slopes. The camp is located at 6400 meters. The rest of the team stopped 200 meters below. We started our descent in complete white-out and reached our tents at the end of the afternoon.

Tomorrow, we will start a long trip in altitude. Our objective is to go back to sleep to Camp 1, then Camp 2, and after a day rest at Camp 2, we hope to sleep at Camp 3 located by the north col at 6850 meters high.

On 17th September, we reached Base Camp, located at 4900 meters, after two days of rest at Sama. We have been joined by Michel Fauquet, known as Chouqui, and Canadian Derek Mayne, with whom we will share our ascent permit and Base Camp commodities. They will be supported by altitude Sherpa Niima Kancha and our team will be assisted by Mingma Tsering Sherpa, Phu Dorje Sherpa and Then Dorje Sherpa.

The route follows a large icy plateau which leads to Camp 1 (5700 meters). Thereafter, it follows a horizontal traverse below gigantic séracs – certainly one of the most exposed areas – before ascending steep snow slopes towards Camp 2. We will need to move quickly in this dangerous zone in order to avoid the unforeseeable movements of this ice fall.

Rendezvous in one week!

Followed by 70 porters, we reached Philim, located at an altitude of 1590 meters. In two days, we should be at Sama, the entry gate to the Manaslu glacier and our last stop before the climb towards Base Camp.

All the team is in good spirits.

At the edge of one of the most secluded Himalayan valleys rises a rocky and icy giant, Manaslu, one of the 14 summits on Earth rising above 8000 meters. Next September and October, Guillaume Hintzy will attempt climbing the Manaslu from the Northeast Face. Faithful to the principles that inspired his previous expeditions, he will carry out this ascent without supplementary oxygen.

In order to reach the 8th highest summit on Earth (8163 meters), Guillaume Hintzy has put together a team of experienced mountaineers. Before the French team can reach base camp, they will trek the Buri Gandaki valley whose boundary leads to a high altitude pass. This pass has been used for centuries to transport salt coming from the Tibetan high plateau. Forbidden for foreigners until the beginning of the 90’s, the valley has been deeply influenced by the different tribes that lived here. As the path goes along, Nepalese villages are substituted for hamlets where the Tibetan language and culture remains intact.

Over a period of four weeks the team will climb towards the Manaslu’s summit, a mountain which inspires deep respect from the greatest mountaineers because of its unpredictable nature. Above base camp, located at 4800 meters, 4 altitude camps will be established in order for the team to reach, without oxygen bottles, the “death zone” (beyond 8000 meters) and return safely. Numerous avalanches, temperatures between -20° and -35°c and the lack of oxygen (35% in comparison to sea level) which reduces physical capacities to a bare minimum will be the main dangers of this strenuous expedition.

Guillaume Hintzy, 35 years old, is married and has a little daughter named Anouk. He divides his life between his professional occupation in Paris, novel and tale writing and his mountaineering and polar expeditions. A notable previous achievement is his 2007 crossing of Greenland by ski, unsupported and unassisted. This year, he expects to be the 12th French climber to reach the summit of the Manaslu.

The expedition will start on the 6th of September and will end on the 19th of October 2009.

© 2006-2022 - 3 Poles is a non-profit organization. All rights reserved. 3 Poles is a registered trademark - I Webdesign & website development: 21e Agency